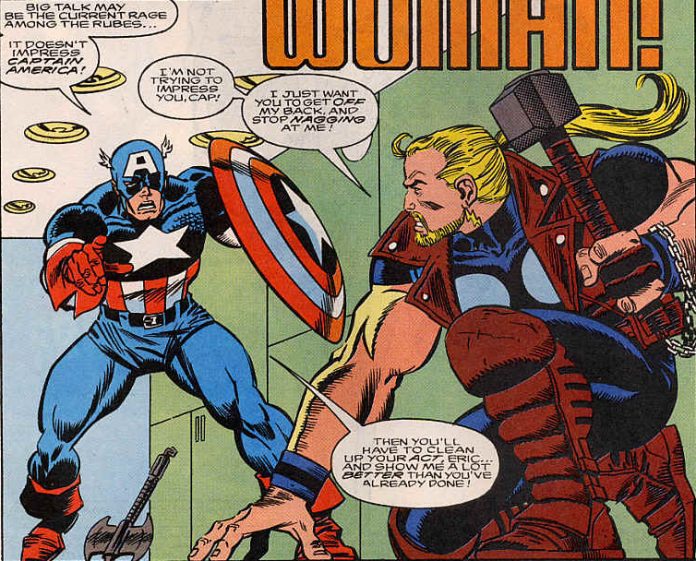 If someone else tried to pick up the mighty hammer Mjolnir, the source of Thor’s powers, they would find it impossibly heavy, because unlike Thor, the great god Odin does not find them worthy. The comics have established that Thor isn’t the only one able to wield the hammer, so who else is worthy? It turns, not that many people. Thor has been around since the ’60s, and since then, only a few people have picked up Mjolnir. More people have actually survived the explosion of Krypton than can wield Mjolnir. Here are some of the people who have been able to lift the mighty hammer.

Eric Masterson was just a regular guy until some heavy stuff fell on him and he was saved by Thor. Masterson kept hanging out with Thor, and even saved him at one point, making him worthy of lifting Mjolnir. Masterson even served as Thor while the real Asgardian was banished. When the real Thor returned, Odin made Masterson his own Mjolnir-like weapon so that Masterson could continue being a super hero.

Masterson fought crime under the identity Thunderstrike, until he was killed off because ultimately, he just wasn’t as cool as Thor.

The enchantment on Mjolnir says “anyone worthy” — it never states that it has to be a human. Thor battled an alien called Beta Ray Bill, who knocked away Thor’s hammer and, surprisingly, was able to to lift it. Beta Ray eventually let Thor have his hammer back, so Odin made him a new hammer called Stormbreaker. That’s kind of a weird name. Odin named one hammer Mjolnir and then the other hammer Stormbreaker? Odin’s a really random guy.

If any of the Avengers would be worthy of lifting Mjolnir, I’d say it was probably Steve Rogers. And Odin agrees. After Thor fell during the Fear Itself finale, Cap jumped in and grabbed Mjolnir, thus becoming a super soldier wielding Asgardian powers. This made him basically unstoppable. Also, it has the added benefit of making Tony Stark super jealous. Iron Man might be a billionaire, playboy philanthropist, but one thing that he isn’t is worthy of picking up a hammer.

Odin became ruler of Asgard when his father, Bor, was killed in battle. At least, that’s what Odin told his people. A time-traveling Loki had actually turned Bor into snow, and Odin could have saved him. He didn’t though, because he wanted to be king. At some point, Bor returned, and Loki tricked him into thinking Thor was a bad guy. During the fight, Bor caught Mjolnir, which is pretty messed up — that means Odin thought Bor was worthy of Mjolnir, but wasn’t worthy of not being turned into snow.

This one is kind of a cheat. First of all, it takes place in the Ultimate universe, so it’s not the main Mjolnir. Also, Magneto didn’t actually lift the hammer, but instead used his mutant abilities to manipulate the air around Mjolnir to control it. So, he was able to move it around, but he didn’t gain any Asgardian abilities. Also, while the mainstream Magneto is a complicated character, the Ultimate version is a complete villain. He used his powers to kill off a good percentage of the world’s population. Basically, there was no way Odin would ever judge that guy to be worthy for Mjolnir. Odin wouldn’t judge Ultimate Magneto worthy to lift Asgardian toilet paper.

First of all, yes, his name is Awesome Android. It’s the best name ever. A robot with a giant block for a head, Awesome Android is generally pretty mindless, and is usually just pointed in the direction of super heroes by a bad guy to wreak havoc. At one point, Awesome Android was updated with the ability to take on traits and abilities from people it encountered. This made it possible for the android to take on Thor’s worthiness, which made it able to lift Mjolnir. Fortunately, this granted Awesome Android Asgardian powers, which included sentience. No longer a mindless drone, it turns out the Awesome Android is a pretty good guy. He stopped being a bad robot and became an ally of She-Hulk. And by “ally”, I mean her legal assistant at her law firm.

It took a long time for it to happen, but in 2003 the Avengers and the Justice League met in a pretty epic storyline. Towards the end of the series, Superman wielded both Captain America’s shield and Mjolnir at the same time in order to take down a cosmic enemy. Unfortunately for Superman, he was only able to hold Mjolnir for a few minutes. I guess he picked up Mjolnir and then had some unworthy thoughts. Gross, Superman. Super gross.