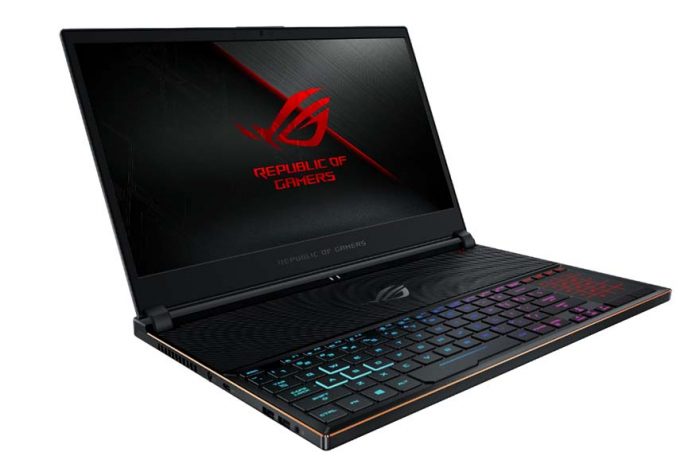 We are in a day and age where notebooks no longer have to be chunky to offer great gaming performance. Slim gaming laptops are getting close to becoming mainstream, if not affordable. I mean the purpose of having a laptop in the first place is the fact that it is portable. Nobody wants to lug around a 4-kilogram powerhouse on their shoulders. While one can rely on an ultraportable for less resource intensive workloads, you can’t play the latest AAA titles the way they are meant to be.

Asus aims at bringing the best of both worlds with the ROG Zephyrus S. It’s a fairly slim 15-inch machine that weighs just 2.1kgs. Sure it’s no MacBook Air, but having the new Nvidia GeForce RTX 2070 crammed into 16.15mm thick chassis is commendable.

Practically, it might help in dissipating heat, but using the Zephyrus S has a learning curve to it. Typing on a keyboard that is closer to the bottom edge isn’t very intuitive. Even getting to the touchpad took me time as I would always hit right in the middle of the keyboard, but that didn’t bother all that much as one would use a mouse anyway. Also, the touchpad doubles as a numpad with the press of a button. The bigger issue, however, is when you use it in your lap as the lack of palm support can get difficult. Also, the screen only goes back to about 110 degrees, limiting your angle of view.

As for the typing experience, the keyboard offers a short stroke of 1.2 mm so it takes a while to get used to. There’s also n-key rollover and 4-zone RGB backlighting across all the keys, but I wish they were a little brighter. You can control the lighting using the Armoury Crate app as well as other tweaks including fan speed, CPU and GPU temperatures, and so on.

The display is pretty good with its 1920×1080 resolution and colour accuracy of 100 percent of the sRGB colour gamut. Sure, there are notebooks that come with over 100 percent, but for a gaming notebook, this seems pretty impressive. Even the blacks and contrast on the display seemed spot on. The display is also said to be Pantone validated, but all that means is that it can efficiently render certain colour profiles which might be used by professional designers. For gamers, what really matters is the 144Hz refresh rate and the 3ms response time for smooth gameplay experience.

There are a decent set of ports including two USB 3.1 Type-C port, three standard USB ports one of which is USB 3.1, an HDMI port and a 3.5mm headphone and microphone combo jack. There’s no Thunderbolt 3 support but one of the USB-C ports supports video output and power-delivery.

On the processing front, this one is no slouch. It comes with an Intel 8th-gen Core i7 8750H six-core processor with 16GB of DDR4 RAM. Adding to the speed is an M.2 512GB NVMe PCIe drive, which might not be enough for your gaming library, but will definitely cut down on load-times by a big margin when compared to traditional hard drives. Combine that with the latest Nvidia RTX 2070 Max-Q GPU, and you have a powerful gaming machine.

Now one can argue that a similar configuration on any other notebook which is not as slim as the Zephyrus S can produce equally good or even better performance. The Witcher III ran at 68-90fps on Ultra settings, while Monster Hunter: World, ranged between 52-74fps on the highest quality settings. Even Rise of the Tomb Raider ran at 55-64fps. Now if you have something like the Alienware 15m or the more affordable Asus ROG Scar II, you might get a slight edge there as the frame rates are at least 5-15 percent better.

The notebook comes with a 60 Wh battery, but all that hardware and the fast display takes most of the juice. Battery life is average and you can expect 2-3 hours of real-life usage, which is not surprising.

Is the Zephyrus S worth the Rs 2,20,000 price tag? Well, if aesthetics and slim design is a priority, then this notebook is not going to disappoint. There are notebooks on the market that offers marginally better performance at a lower price point, but you are paying that extra premium just for the way it’s designed.

Lenovo Legion gaming smartphone may be launched in early 2020