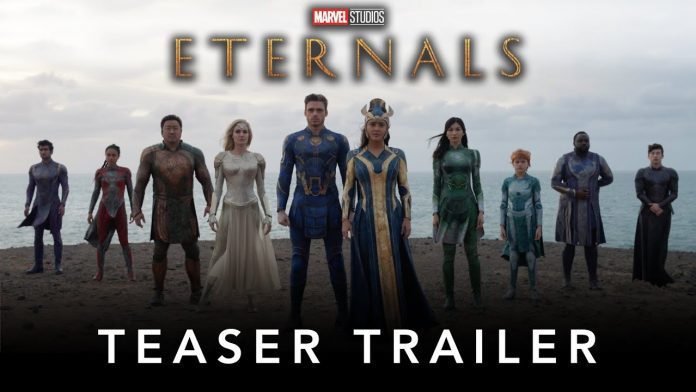 The first Eternals trailer hints that a bigger, more dangerous villain than Thanos is coming to the MCU. It took a lot for the Avengers to defeat the Mad Titan, including several sacrifices just to ensure that the universe is free from his threat. However, it appears as if not too long after the Infinity Saga wrapped up, a brand new villain is lurking in the MCU, only waiting for the right moment to attack.

As the franchise moves on to a brand new chapter of storytelling with Phase 4, Marvel Studios is building on the history of the universe in various ways. However, arguably the most consequential in that regard is Chloé Zhao’s Eternals with its story spanning for centuries, although its main narrative takes place in a post-Avengers: Endgame world. The blockbuster introduces the titular superhero team, whose members were created by the Celestials and are essentially all-powerful beings. In the trailer, the Eternals’ leader, Ajak (Salma Hayek) says that for thousands of years, they’ve remained hidden, not meddling with the Earth’s affairs, until now.

While the Eternals trailer didn’t reveal why they’ve decided to keep to themselves, this is an important indication that something is coming that would ultimately force them to reveal themselves. Chances are that it would be a brand new villain that will threaten Earth and perhaps even the universe. Considering the fact that they’ve stayed put even amidst the Avengers’ dire fight against Thanos, who wiped out half of life in the universe, this unnamed adversary may be far more dangerous than the Mad Titan. This is backed up by the choice of song in the Eternals trailer: “The End of the World” — written by Arthur Kent and Sylvia Dee, but this version was remixed by the movie’s composer, Ramin Djawadi, and performed by Skeeter Davis. The track’s title in itself seems like an ominous warning for what’s going to pan out in the blockbuster

Plot specifics for Eternals are still scant at the moment, and as with Marvel Studios’ first teasers, the debut trailer focused on its heroes. Given this, it’s uncertain who exactly is the bad guy in the narrative. Looking at the comics, the Deviants are usually the primary antagonists for the Eternals. Both were created by the Celestials as they conducted genetic experiments on humans. Coming in varying shapes and sizes, the Deviants typically look like monsters, although they are intelligent beings. Marvel Studios’ official synopsis for the blockbuster teases the Eternals’ clash with the Deviants, but it’s not outside the realm of possibility that they’re not the ultimate antagonists in its story. Once again, referencing the comics, the Eternals can also find themselves facing against their own such as Druig (Barry Keoghan) and maybe even Sprite.

As they emerge from hiding, the Eternals expected to play an important role in the MCU moving forward. They will change the overall power dynamic in the franchise and even how the history of the universe is perceived. From the get-go, however, the main challenge of Eternals is to justify the heroes’ non-involvement in both Avengers: Infinity War and Endgame while the Avengers battled it out with Thanos.